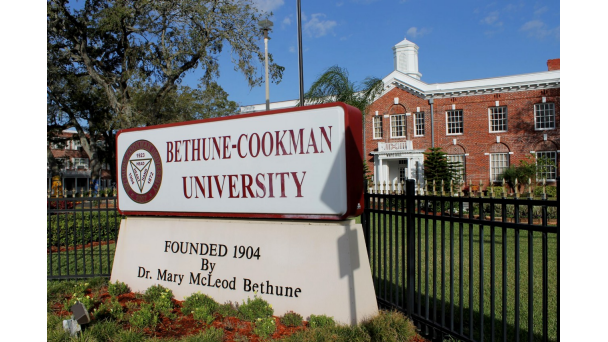 The Daytona Educational and Industrial Training School for Negro Girls was founded by Mary McLeod Bethune in 1904.

The school consisted of a two-story frame building owned by John Williams, a black carpenter. The rent was $11 per month, but Dr. Bethune only had $1.50 to offer as down payment.

On October 4, 1904 the school opened with just five little girls whose parents paid the $0.50 per week tuition. Mrs. Bethune scavenged the city dump heaps and refuse piles of resort hotels for supplies and clothing for her students. Packing crates and boxes were used as furniture, upturned baskets served as chairs, and the little girls slept on a cast-off double bed with a mattress of donated corn sacks that Dr. Bethune had sewn together and stuffed with Spanish moss. Groceries consisted of donations from generous neighbors or were purchased from the proceeds of sweet potato pies baked by Dr. Bethune and sold to black railroad workers.

The school soon moved to the only available location, the city dump. Selling her famous sweet potato pies, Mrs. Bethune was able to obtain the $5 down payment for the property.

Mrs. Bethune impressed several wealthy, white vacationers and winter residents with her strong will, spirit of sacrifice and ambitions for the school. They, in turn, provided the financial resources that enabled the school to develop. The school's early benefactors included oil baron John D. Rockefeller, James N. Gamble (of Procter and Gamble fame), sewing machine innovator Thomas White and author Harrison Rhodes. In 1923, the school affiliated with the Methodist Church and became a co-educational junior college after merging with Cookman Institute of Jacksonville. In 1942, Bethune-Cookman College became a four-year institution, and in 2007, the school became Bethune-Cookman University.